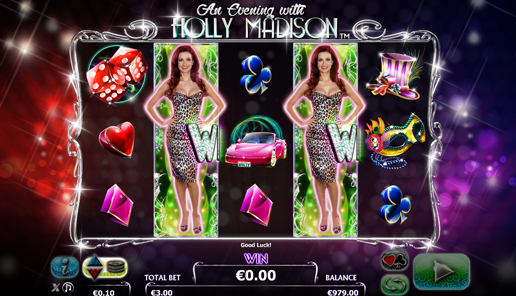 From an imagery perspective, the slot looks decent enough, and it contains several icons which one “might” relate to Holly Madison herself. That is, if you’ve heard of her. If you haven’t this slot does give a little insight into her life.

Wagering is really simple to sort out in this slot. At the bottom of the reels, on the left hand side, is the coin button. You can use the blue and red arrows to increase or decrease your bet in this slot, although all of the 25 paylines which feature upon its 5 reels are fixed into place.

When using those buttons, you will notice that at its cheapest, An Evening with Holly Madison costs just 1p per spin. At its most expensive, you’re looking at wagering no more than £60 per spin. No doubt, spending the evening wining and dining the real Holly Madison would cost considerably more. Dinner and a movie with Holly, wouldn’t enable you to win vast sums of money, though. All cheap jokes aside, let’s move onto the symbols themselves.

The lowest paying icons in this slot are the poker suit symbols. These can see players win anything from 5 coins up to 100 coins, depending on how many of which icon appear on the reels. Heels and masks pay slightly more.

The hat, motor car, dice and playing cards themselves are worth larger sums of cash. Players can expect to win anything from 20 coins up to 2,000 coins with those symbols. Another one of the best paying icons in the game, though, is the Holly lollypop scatter. When this symbol appears 5 times anywhere on the reels, the player can win 1,250 coins.

Holly herself acts as a wild, and she appears in various poses on the second, third and fourth reels. This wild icon can substitute itself for all other symbols, barring scatters. However, wilds can also trigger a Holly Goes Wild feature. With this feature, a wild can expand to cover an entire reel, and creative larger wins. If you were to land expanding wilds on the second, third and fourth reels at once, you’re looking at some serious cash prizes.

The scatter icon is the aforementioned Holly lollypop icon. When this symbols appears 2, 3, 4, or 5 times on the reels in any position, the player will win 25, 50, 125 or 1,250 coins. A Rockin’ Re-Spin is also present in this game. When any 2 scatters appear, the player will get a second chance to win, as the reels with the scatters on are held, but all other re-spin.

Free Games and the Photo-shoot Bonus

If a player lands 3 or more Holly scatters on the reels, then they’ll trigger the free games feature in this online slot. An Evening with Holly Madison’s free spins bonus consists of 10 free games. During this bonus, players are going to want to collect kisses. There is a very good reason for that.

After the free spins session is complete, the player enters the Photo-shoot Bonus. This is where those collected kisses come into play. Each kiss you have collected gives you more chances to double up your free spins win. The more kisses you have, the bigger the sum you’ll exit the bonus with.

In many ways, the photo-shoot bonus is very cliché. However, there aren’t too many online slots with this kind of feature, and that is ultimately a really attractive proposition. An Evening with Holly Madison could turn into a superb evening of big cash wins, and it’s all thanks to a couple of kisses.

This particular online video slot can be found at several high-profile online casinos. We’d always recommend playing it at Guts Casino, though. Guts Casino has so many quality casino games, that you’ll never be short of something to play. New players can also claim a welcome bonus worth up to £300, as well as 100 free spins when they join Guts Casino today.