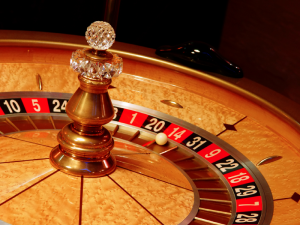 Roulette is a game of chance. The roulette wheel consists of 37 numbers, zero to thirty six, whereby zero is green and the rest of the numbers are divided between black and red numbers. The idea of the game is to guess where the roulette ball will land.

A number of different bets can be placed. A bet may be placed straight up on a single number, black or red, odd or even, low or high, first column, second column, third column and finally the first dozen, second dozen and third dozen numbers. There are also various split bets that can be placed, which means placing a single bet on more than one number.