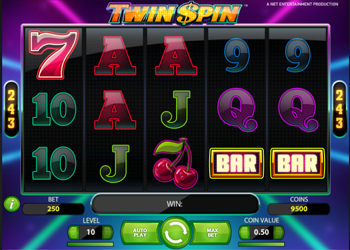 Twin Spin (also known as Twin $pin) is not your conventional video slot. In fact, this Net Entertainment developed title isn’t really a video slot at all – at least, not in the true sense of the term. Twin spin is more like a glorified classic slot machine game, although it does have one really cool special feature which you won’t find in any classic slot today.

As far as its appearance goes, Twin Spin is pretty basic. The images on the reels consist of high playing cards, jewels and of course, 7s. Twin Spin’s single most important feature is a twin reel bonus, which we’ll come to a bit later in this online slot review. Twin Spin can be quite cheap to play, and its no-fuss, non-complicated gameplay should appeal to all players, really.

Located at the bottom of the reels are the game’s wagering controls. Right from the off, players will be able to see that they can adjust the value of their coins, and choose how many they wish to bet. Naturally, they won’t be able to adjust the number of paylines in this game, since Twin Spin is a 5-reel, 243 ways to win title.

Players can opt to choose coin denominations that can rise upwards in value from 1p to 50p per coin. Up to 10 of these can be wagered per spin, too. Obviously, these aren’t bet per line, since there are so many of them. What you are looking at with Twin Spin, is a minimum stake of 25p per spin, and a capped maximum bet of £125 per spin.

As with most online slots, the high playing cards won’t win you much. In fact, the 9, 10, Jack, Queen, King and Ace icons can only see you pocket wins that range from a minimum of 3 coins, up to a maximum of 40 coins.

By contrast, the more classical looking symbols pay much better rates. These symbols include the traditional cherries, bells, bars, sevens and diamond icons. What you’re looking at here, are wins that stem from 10 coins up to 1,000 coins at most. 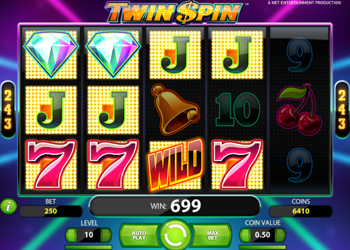 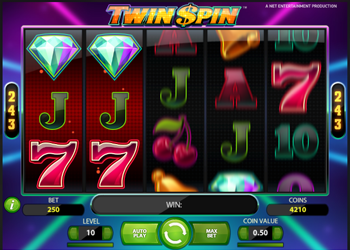 There is only really one special icon in Twin Spin. That special symbol is a wild, and when it appears, it can replace all other symbols in the game, bar none. Since there are no scatters, wilds can always be used to pocket wins. You won’t have any trouble identifying them either, since they take the shape of the word “wild”, written in red and yellow flaming text. Wilds have no monetary value of their own.

Twin Spin gets its name from its bonus feature. Well, we should use the term “bonus feature” lightly, since it is actually a part of the main game on any spin. At the start of each spin, at least two identical and adjacent reels will be linked together. During that spin, the twin reels might combine together to form triple, quadruple or even quintuple reels. Naturally, all of the symbols on the reels will be the same.

This means that you could easily pocket wins of up to 270,000 coins, if you land identical symbols on all of the reels. All symbols also appear stacked on the twin reels, meaning wins can get even larger than you might normally expect. Wilds are also capable of appearing on the reels, which can really boost your wins at times.

There aren’t really any other features in the Twin Spin video slot, although those that are present are pretty much all you need to enjoy a really successful classic and video slot hybrid such as this.

Twin Spin is a really exciting slot to play, since it represents something new in the world of online slots. If you’ve enjoyed our Twin Spin online slot review and now want to try the slot itself, you can find it at all good casinos offering Net Entertainment software. Might we recommend Guts Casino to you? If you aren’t a member already read our guts online casino review. Guts Casino will offer you a £300 welcome bonus on your first deposit, as well as 100 free spins on Net Ent’s Starburst slot.